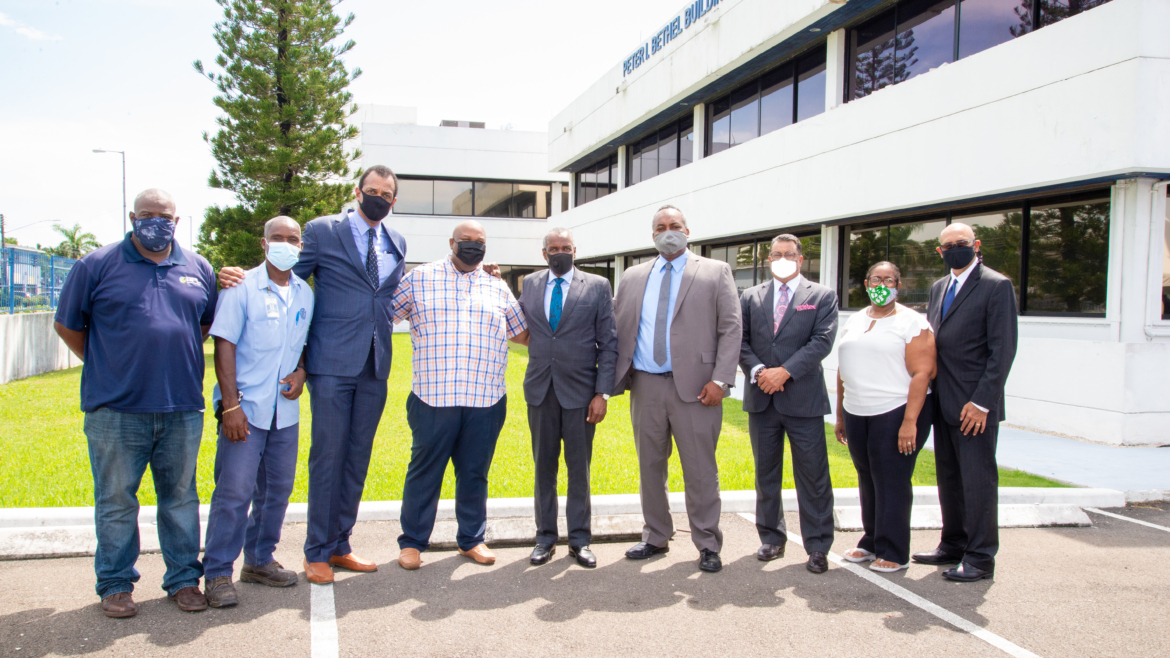 
NASSAU, BAHAMAS – Bahamas Power and Light Company Limited (BPL) is pleased to announce the signing on Wednesday, September 8, 2021, of the historic Industrial Agreement (IA) between the Bahamas Electrical Workers Union (BEWU) and BPL. This groundbreaking agreement is the first IA signed by BPL since the Company took over management of the electrical utility from Bahamas Electricity Corporation (BEC).

Signing for the BEWU were Union President Kyle Wilson, Assistant Secretary General and Treasurer Sabrina Bain. CEO Whitney Heastie, Director of Human Resources Evis Missick and Director of the HR Committee of the Board of Directors Ferron Bethell, QC, signed for the company. Director of Labour Quinton Laroda also signed the agreement.

At the signing ceremony, hosted on the grounds of the Peter I. Bethel Building on Blue Hill Road, Union President Wilson touted the historic nature of the agreement, stating that the union was pleased with the deal.

Said President Wilson, “The union had to do a lot of travailing, and a lot of pushing to bring forth what we have today, but everybody knows that after all that travailing, when the baby is born, it’s a bundle of joy. Today, I’m experiencing joy, not just on behalf of the workers, but the Bahamian people from Abaco down to Inagua. It proves that we can truly work things out, no matter how difficult it seems, because this wasn’t done on the streets. You might have seen us take to the streets, but it was still done in the boardroom.”

“I give thanks to all parties involved…Today is an historic day. This is the first signing of an (Industrial Agreement) in the history of Bahamas Power and Light, and I’m proud to be the first president to pen my name to a contract. And I’m proud of this contract…The union has not given one concession. We have gained, and we have gained through hard work.”

“I want to jump for joy on behalf of the people, because this is an historic day for the people,” Mr. Wilson concluded.

Deputy Prime Minister The Hon. Desmond Bannister was on hand for the ceremony, and also commented on the historicity of the deal.

“It is BPL’s first industrial agreement,” he said.

BPL CEO Heastie said The Bahamas, like every other nation dealing with the COVID-19 pandemic, has had to adapt as the deadly public health scourge has also upended the working world.

“The pandemic has created a scenario in which workplace closures and the implementation of measures necessary to halt, or at least curb the spread of the virus have wreaked havoc on enterprises and workers across the world. We here at BPL are no different.

“We have had to adapt, and be flexible, in order to continue to provide the services we offer during this incredibly difficult time. And adapt we have, thanks to the care, concern and flexibility of our incredible staff members. So, before anything else, to them I say thank you.”

Director Bethell said, “When the current Board of Directors took over responsibility for the national electrical utility in August 2018, they found a dire situation facing the company. In addition to an aging generation fleet and T&D infrastructure that required serious attention, we had a human resources issue as well. As such, the Board of Directors made our people a priority in the strategic plan we created to help address the challenges at BPL.

“Included in our top priorities are a requirement for BPL to demonstrate a turnaround in customer perception, particularly as relates to provision of Customer Service Excellence. We know that will only happen with the cooperation and buy-in of the entire team, and that is what today’s signing represents.”

There Is A Plan: BPL Chairman Discusses Strategic Plan